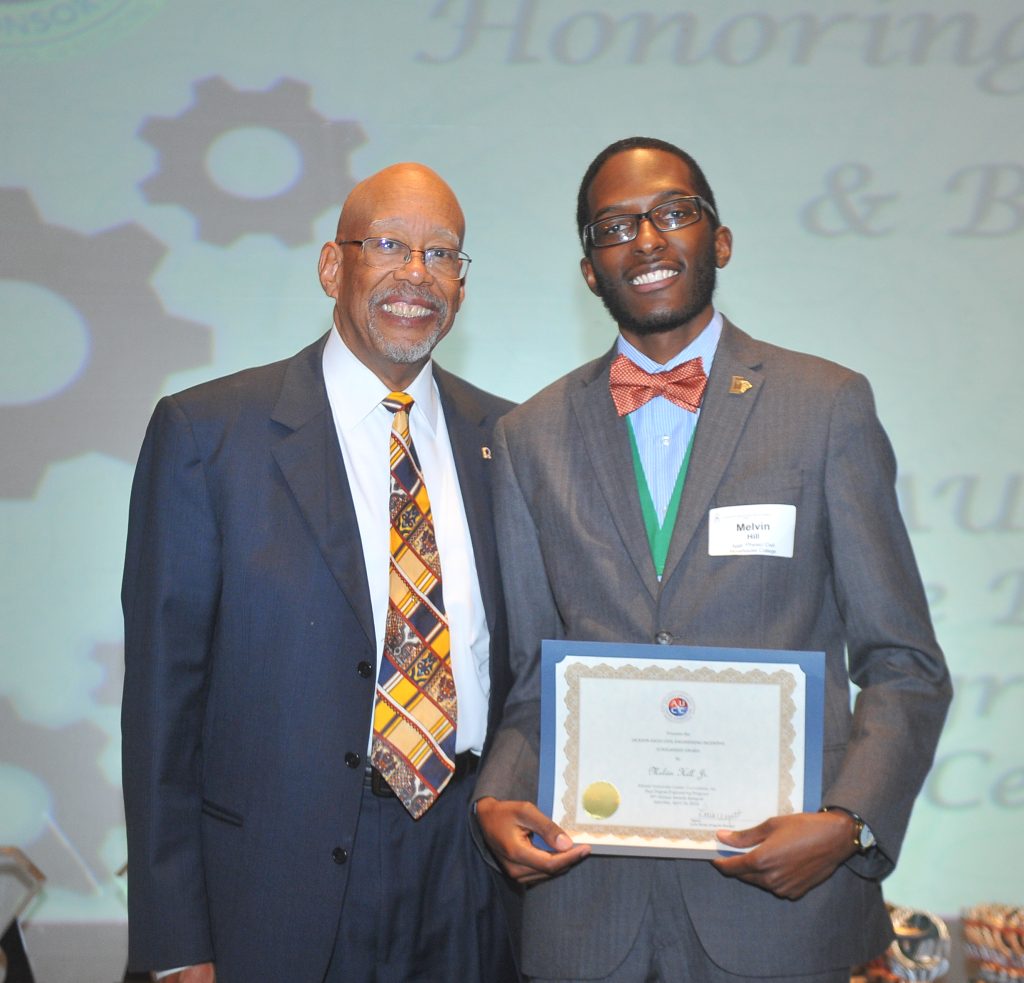 Since he established the Jackson-Davis Foundation in 2002 to award scholarships in honor of his grandparents Gladys Davis and Birdel F. Jackson who attended Spelman, Rust and Knoxville Colleges, 37 AUC Dual Degree Engineering program students have received $50,000 from his foundation. Awarded to civil engineering students interested in pursuing careers in consulting engineering, obtaining their professional engineering license, or becoming a leader in the field, Jackson’s philanthropic spirit has greatly benefitted DDEP.

Jackson began his professional career in Pittsburgh, Pennsylvania, with the American Bridge Division of U.S. Steel. His next job took him to Washington D.C. and the Bridge Division of the District of Columbia Highway Department. He moved to Atlanta where he was employed by the U.S. Environmental Protection Agency. After which he served as General Electric Project Engineer responsible for construction of a Caustic Soda Plant in Indiana and miscellaneous manufacturing facility construction. He later returned to Atlanta where he served as a regional manager, division director and vice president for a national black owned consulting engineering firm and later a major black-owned architecture and engineering firm. In 1988, he purchased the Atlanta office of the architecture firm and began his entrepreneurial effort, B&E Jackson Engineers, and the firm’s staff grew from three to 47 professionals.

“Birdel and I both worked and marketed projects together. Birdel is an ‘old-time engineer’ in the best sense of the phrase – honest, ethical and smart,” wrote Robert Bielek, district engineer at Texas Department of Transportation, on Jackson’s LinkedIn page. “ You can’t go wrong with Birdel on your team.”

He was a registered professional engineer in Georgia and 13 other states; a member of the Society of American Military Engineers, Consulting Engineers Council of Georgia – named 1997 Engineer of the Year, American Society of Civil Engineers, National Organization of Minority Architects, National Technical Association and National Society of Black Engineers. Birdel’s professional experience included Engineering Design and Surveying for several municipal governments, design and construction of highways, bridges, wastewater facilities, military buildings and housing projects. He has supervised and scheduled more than $1 billion in projects.

Initiated into the Omega Psi Phi Fraternity in November 1964, at the Xi Tau Chapter at Toledo University, he has remained an active and ardent Life Member and participated in the establishment of Delta Kappa Chapter at Georgia Tech; reactivating Tau Chapter at Atlanta University; charter member of Beta Xi in Evansville, Indiana and Chi Gamma Gamma in Marietta. His community service work involves mentoring programs with CHI GAMMA GAMMA Chapter of Omega Psi Phi; 100 Black Men of Atlanta; Aviation Career Enrichment (a program to encourage black youths in Aviation) and Engineering Rap Session Counselor at Douglass High School. He was selected as the 1997 Engineer of the Year and awarded the Lifetime Achievement Award by the American Council of Engineering Companies and Georgia Society of Professional Engineers. Mr. Jackson was selected by the University of Toledo, College of Engineering as the 2001 Civil Engineer of the year. He was elected to the Academy of Distinguished Engineering Graduates at Georgia Tech in 2002. Mr. Jackson was chosen as a 2004 Diversity Champion for the American Society of Civil Engineers in recognition of voluntary services to make the profession more inclusive.

Jackson was a registered professional engineer in 14 states; a Fellow of the Society of American Military Engineers; member of the Consulting Engineers Council of Georgia, American Society of Civil Engineers, National Organization of Minority Architects, National Technical Association and National Society of Black Engineers.

The Atlanta University Center Consortium is forever grateful and honored for the path Mr. Jackson has paved in the engineering profession.