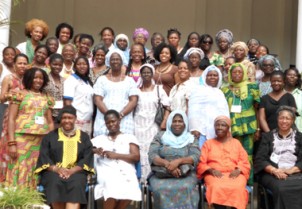 When I started seminary in the late 1980s, liberation theology still was influential. Liberationists’ arguments, often based in

Christian scripture and theology, so compelled theological discourses that class time in most US seminaries, divinity schools, and schools of theology engaged them, even if only to challenge their validity. During the late 1980s, womanist theology (a strand of US black liberation theology presenting perspectives by and about African American women’s experiences) was emerging, and transnational organizations linking liberationists were in full swing.

As a new seminarian and a daughter of the US Civil Rights Movement, I was excited by ways liberation theology connected with currents of the Movement, and with what I knew of independence and anti-colonial movements globally. African American post-Civil Rights connections with Africa motivated by the Civil Rights Movement were waning by the time I first traveled to the continent in 1982, but that trip provided a chance to experience firsthand and to connect intellectually and emotionally with the land of my ancestry.

Liberation theology provided the opportunity to explore intellectual connections of my identity as an African-descended woman, my commitments to ideals of the US Civil Rights Movement, and my understanding of transnational anti-colonial ideas and practices.

Rosetta Ross is a professor of religious studies at Spelman College in Atlanta. She is author of Witnessing and Testifying: Black Women, Religion, and Civil Rights(Fortress Press, 2003).

[/colorblocks]Earlier this month, from July 8-12, 2012, I had the opportunity to extend exploration of these connections when Ghanaian women, Liberian women, Nigerian women, and black women from the United States met in Accra, Ghana, for the first ever African and African Diasporan Women in Religion and Theology Conference—four days of lecture and discussion engaging African cultures and religious traditions, Islam, and Christianity, with a focus on violence against African-descended women and girls.

The conference was hosted by theologian Mercy Amba Oduyoye at Trinity Theological Seminary’s Talitha Qumi Institute of African Women in Religion and Culture in Legon, Ghana (which Oduyoye founded and directs).

Among the generationally diverse group of conferees were graduate students, young women interested in religious study and practices, seminary administrators, and Christian denominational leaders and executives from Africa and the United States; representatives of Ghanaian Muslim women’s groups and Ghanaian traditional leader, Nana Amba Eyiaba, Queen Mother of the original Cape Coast area; as well as college, seminary, and university professors from Africa and the United States.

Beginning with its opening ceremony, the meeting celebrated the diversity of African-descended women even as it sought to build upon the commonality of African ancestry.

Traditional Ghanaian drummers and dancers began the conference with an ebullient welcome.  Amid the ceremony’s invocation of a “Spirit of Unity,” evocation of ancestors, and call for a commitment to work together, Ghanaian theologian Elizabeth Amoah lamented some Africans’ roles in capturing and trading other Africans into enslavement and expressed hope for possibilities of the meeting.

Other program highlights included lectures by Oduyoye and Jamaican American theologian Dianne Stewart Diakitè, a “hope” march protesting violence against women and girls, and a final day of strategizing to envision and plan collaborative projects. For US representatives it was fascinating to observe the  diverse and creative ways some African women integrate indigenous traditions with Islam and Christianity.

A Legacy of Liberation

Perhaps most intense among the week’s programs was conference participants’ group travel to tour two forts, at Elmina and Cape Coast, where many captured Africans last were held before being taken into “New World” enslavement. Tour of the forts, castles atop dungeons of enslavement, gave context to the differing social and geographical worlds we exist in. They also encouraged conferees to hear each other’s stories, and make space to begin speaking honestly about diverse meanings and experiences of being African-descended women in a variety of circumstances.

Building community was an important goal of meeting organizers. And while it was clear that attending to diverse identities and experiences is an important prelude to building community among African-descended women, four potential collaborative projects did emerge related to economic development, future conferences, joint publications, and mentoring/exchange activities.

Absence of representatives from Southern and Eastern Africa, South America, Asia, Europe, Australia-Oceania, and Antarctica challenged the meeting’s full identity as “African” and “African Diasporan.” As conference organizers, Rose Mary Amenga-Etego, Evelyn Parker, and I began and ended the meeting lamenting constraints that prevented wider representation and anticipating broader participation of women on the continent and in the diaspora at future meetings.

Political and economic trends in the United States and across the globe indicate that the ethical agenda that unleashed more than three decades of anti-colonial fervor and reform is nearly passé. Among religious leaders and activist intellectuals, including people-of-color-allies, that fervor, which birthed liberation theologies, eventually delivered structures such as the Ecumenical Association of Third World Theologians (EATWOT), the Theology of the Americas Project, and other organizations which reached across cultural and continental differences to collaborate in affirming elements of indigenous cultural and religious practices. It also allowed for new scholarship, tools for the critical analysis of the colonial structures and powers that put religion to use in service of empire.

During the late 1970s and throughout the 1980s African-descended women (including Mercy Amba Oduyoye, Brigilia Bam, Musimbi Kanyoro [from Africa], and Katie G. Cannon and Jacquelyn Grant [from the United States]) joined other women of color from Asia, Central and South America, and Austraila-Oceana in shaping and broadening liberation theologies—and especially in challenging the patriarchy of most liberationists. Their work manifested discursively as women’s religious scholarship, and structurally in organizations such as the Women’s Commission of EATWOT, the Circle of Concerned African Women Theologians, the Womanist Approaches to Religion and Society Group of the American Academy of Religion, and the Pacific, Asian, North American Asian, Women in Theology and Ministry (PANAAWTM).

Although the legacy of this earlier activism has faded, the July 2012 meeting of African and African Diasporan Women in Religion and Theology emerged from the intentions and momentum of this work. The meeting’s connection to history was marked ceremonially in naming of ancestors and planting a cinnamon tree in memory of Ada Maria Isasi-Diaz, founder of Mujerista theology.

In addition to the promise of four collaborative projects and other connections made at the meeting, participation of graduate students, younger scholars, and younger women is, as doctoral student Amey Adkins observed, a source of possibility for the future of a liberationist agenda in religious practices and discourses. Although the mid-twentieth century spirit of social solidarity seems nearly passé, hope exists in efforts that seek to take up ideals of a better future for everyone.