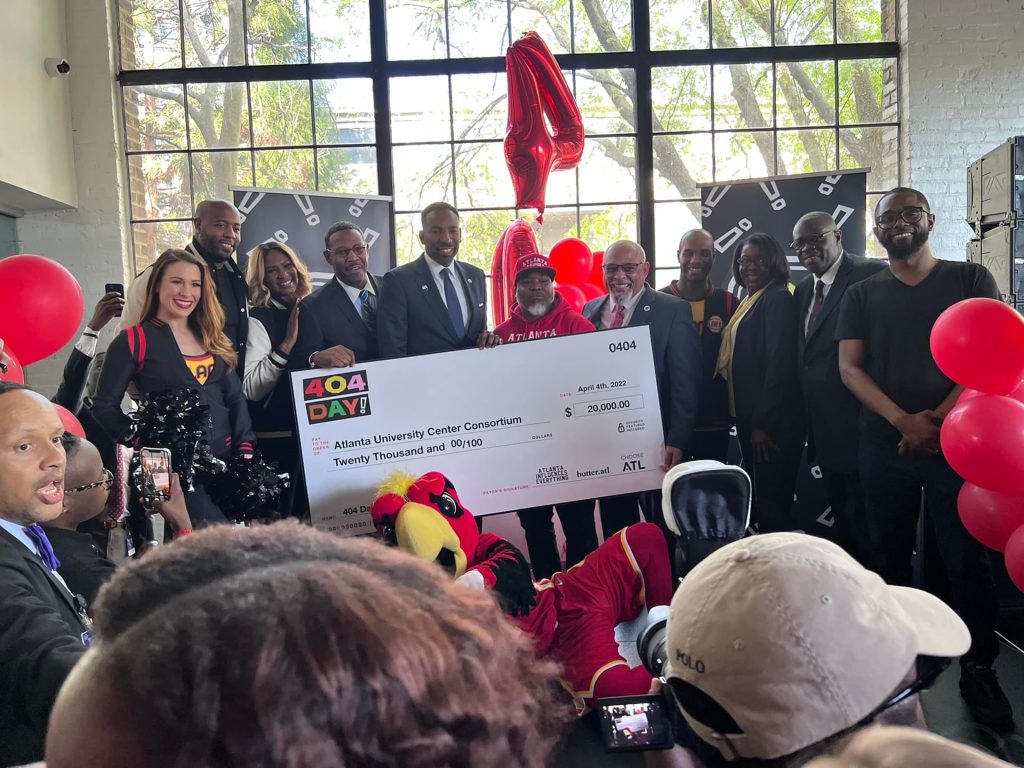 The funds were provided specifically to graduating seniors to ease student debt by partners including Atlanta Influences Everything, Butter ATL, the Atlanta Hawks, Papa Johns, Discover Atlanta and Athlete’s Foot.

Student debt is on the mind of many college seniors. Thanks to a generous donation from the collaboration of the Atlanta Metro Chamber, Butter.Atl and Atlanta Influences Everything, the student debt of over a dozen Atlanta University Center graduating seniors were satisfied. The 404 Day Scholarship was created and donated to the AUCC to help seniors close the financial gap impeding graduation and entry into metro Atlanta’s competitive job market. Scholarship contributions of $20,000 were provided by partners including the Atlanta Hawks, Papa Johns, Discover Atlanta and Athlete’s Foot. The financial gift aimed to reduce the financial burden to help students reach their academic and career goals in addition to increasing diverse candidate availability within metro Atlanta.

On 404 Day, April 4, 2022, representatives from the Atlanta University Center Consortium (AUCC) were presented funds to disburse to students with a minimum 3.0 GPA and financial need. Student debt was eased for 20+ students from $300 to over $2500 enabling them to complete the final steps for graduation. Students who applied were required to share, “Why they chose Atlanta for college and how their experience living in metro Atlanta influenced who they are today.” The scholarship opportunity was also provided with the hope that students would seek post-graduation employment in Atlanta and continue to share their talents with the region.

Andre Dickens, Mayor of Atlanta, believes this is an amazing opportunity for students and partners. As a former Atlanta city councilman, he sponsored 404 Day to be continuously celebrated and applauded the gift to AUC students.

“My hope is that everyone who graduates from an AUC schools would stay in Atlanta. They have developed this education in Atlanta. I want our workforce to be developed here because of the diversity and the knowledge and talent that comes out of the AUC. I think AUC students make great leaders. I encourage them to get in the game, start working and be able to sow deep roots in the city of Atlanta. That’s what really got Atlanta to prominence. We have all of these great historic figures of our city, many of whom graduated from the AUC and they became leaders,” Dickens said.

Students who were awarded lauded their experience in the Atlanta University Center.

Malachi J. Walden, a graduating senior from Morehouse College, said he chose Atlanta because of Morehouse and he has been taught many life lessons such as networking, expanding his personal brand and never taking a moment for granted. He said he feels blessed with this opportunity to pay off his balance so that he can have a full circle moment.

Rosetta Green, a graduating senior from Clark Atlanta says she chose Atlanta for college because of the culture and as a senior she can clearly depict how Clark Atlanta and the city of Atlanta has influenced her mindset and career goals. She aspires to be a Behavior Specialist for children and families allowing her to serve the Atlanta community. She believes this scholarship provided her with the ability to focus on what was needed to complete her degree and not her financial obligations.

Recipient Amirah Daubon, a graduating senior from Spelman, said she realizes living on MLK Drive and being surrounded with neighbors who randomly leave school supplies on my front step are the moments she cherishes most about her dynamic growth in Atlanta.

Recipient Kenneth W Salter, a graduating senior from Morehouse College, said he chose Atlanta for college due to its rich history in Black excellence and culture. As a history major, he knew if he studied African American history, he needed to be in a city where Black culture and tradition was prevalent.

AUC Commencement ceremonies will be held this weekend, with Morehouse School of Medicine being held the following weekend. A schedule is provided below.