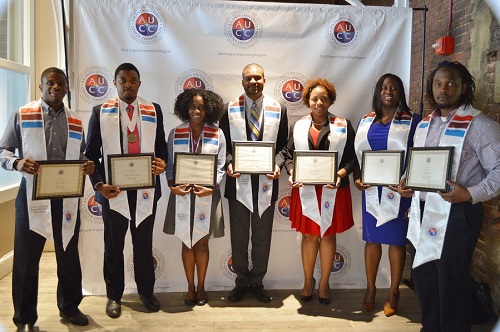 “The awards banquet offers a great opportunity for us to showcase all the involved participants – students, partnering and member institutions, as well as the corporations who sponsor and hire our students,” said Sherry Turner, Ph.D., executive director for the Atlanta University Center Consortium Inc. “As the nation’s largest consortium of historically black institutions, we are a major feeder for minority students who enter engineering schools. Through this unparalleled partnership, our students have the benefit of receiving two degrees – one from the home institution and one from the engineering institution – in approximately five years.”

Students of the Year

The Most Outstanding AUCC Dual Degree Engineering Student of the Year goes to students who are extraordinary examples while matriculating through the program. This year there were three outstanding students, one from each of the schools: Janetta Brown from Spelman, Vernon Gentry from CAU, and Anjolaoluwa Lanre-Ladenegan from Morehouse.

Brown, a mathematics major who graduated from Spelman in 2012, is currently attending North Carolina A&T State University. Academically excelling both at Spelman and North Carolina A&T, she served as a Boeing Co. intern four years and as vice president for the Institute of Industrial Engineers.

Always a good student, Vernon Gentry, really found his stride while at Georgia Institute of Technology. He is a co-op engineer for Delta Air Lines, an intern for Chevron and IBG Construction Services, and River to Tap Inc.

A true leader, Anjolaoluwa Lanre-Ladenegan has served as vice president for the AUC chapter of the National Society of Black Engineers and president of the AUC African Student Association. As a Cummins Inc. intern for the past three years, he has excelled, even being featured on the company’s website. Currently in the engineering program at the University of Notre Dame, Anjolaoluwa Lanre-Ladenegan serves as president of the Notre Dame chapter of NSBE.

For CAU students, there is The Terry and Sandra Lee Scholarship recognition, which was presented to Frank Lee. Julian Pilate-Hutcherson, Morehouse, and Mykala Jones, CAU, received the Jackson-Davis Civil Engineering Incentive scholarships.

“We have 322 students enrolled in DDEP, 87 of which have a 3.0 or higher GPA, and this banquet allows an occasion to honor and recognize our best and brightest is what this day is all about,” said Denise Holmes, director for the Office of Academic and Career Services for AUCC.  “Our students had the opportunity to participate in an intimate networking event with some our successful alumni and representatives from some of the world’s top organizations who hire engineers, and represents the culmination of what we work toward during the whole year.”

If you are interested in partnering or sponsoring with the Dual Degree Engineering Program to increase minority participation in engineering programs, contact us at 404-523-5148.