For Jackson, No Job is Too Much for This Scholar-Athlete 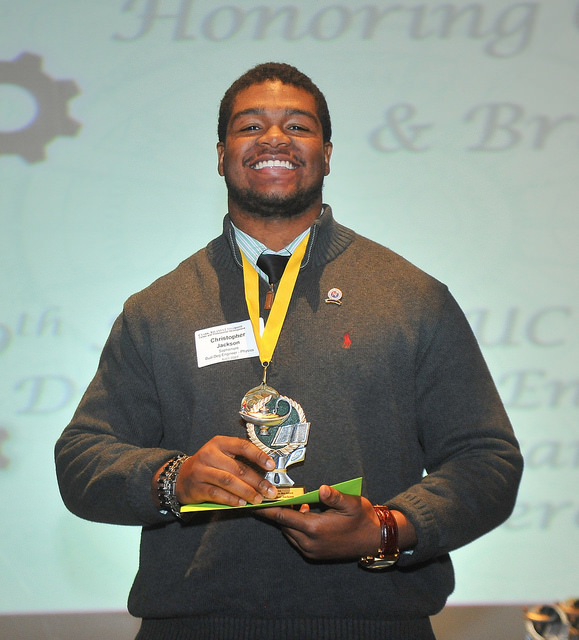 Christopher Jackson grinds more than 50 hours a week on three jobs – Moe’s Southwest Grill at Clark Atlanta University, Allied Universal Security Services and Uber Eats. While 50 hours a week might be standard for many workers, it is not normal for a full-time mechanical engineering scholar-athlete who holds a 3.85 GPA at CAU.

Jackson is one of 130 scholar-athletes at CAU to earn a 3.0 GPA or higher during the spring and fall semesters. A Dual Degree Engineering Program student, Jackson came to CAU after he was denied admission to Georgia Tech, although he graduated at the top of his class. However, things would work to his advantage.

“I was accepted to the University of Georgia, but I did not want to go there – that’s my rival school of course, and then my major was not accredited at UGA at the time,” said the Warner Robins, Georgia, native, who grew up in Conyers, Georgia. “Once being recruited to CAU for football and hearing of the 3-2 program for engineering and being given a second chance to head to Georgia Tech, I took advantage of the opportunity and have gone with it since.”

Committed, determined, and unwavering, Jackson credits DDEP with guiding him with career opportunities, helping him receive scholarships, and building his credit.

“Chiefly, I feel this amazing program transforms your mindset from that of a child into one of a successful adult,” said Jackson who has landed a summer 2017 internship with Rockwell Automation in Milwaukee.

With plans to transfer to Georgia Tech in the fall, Jackson will pursue autonomous intelligence and robotics engineering. After Georgia Tech, Jackson wants to work for RedZone Robotics, Kawasaki Robotics, or contract to do research for the Defense Advanced Research Projects Agency.

Strictly speaking, the 210-plus pound linebacker’s scholar-athlete accomplishments and successes come from a motivated spirit.

“It is not the fact that you are a scholar-athlete that sets you apart from the majority of the population, but the fact that amid multiple adversities in your personal life, school life, work life, and even sports life, you are motivated to advance through boundaries, limits, and parameters that make others quit the same path you travel,” said Jackson.

“It is certainly not an easy task or feat; however, for those who are not afraid of grinding to get to where they desire to be, it becomes less of a burden to be a scholar-athlete and transforms more into a mentality of ‘If this can’t stop my success, then what can.’”