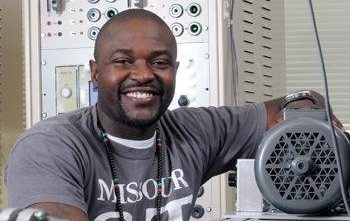 Middle school marks a milestone in life for many young minds. For Marcus-Tor Strickland, it marked a career turning point. After performing a sixth-grade science project, his trajectory was to become an engineer.

“I didn’t know what I was doing was called engineering,” said the dual degree engineering alumni who graduated from Morehouse College with a degree in mathematics and an electrical engineering degree from Missouri University of Science and Technology in Rolla, Missouri. “I just liked lighting up a light bulb with a potato.”

M-T, as he prefers to be called, has moved beyond “potato electricity” to managing large-scale business and manufacturing processes and quality analysis and improvements for Fortune 500 companies such as Clorox, Nucor, GM and Time Warner. Today, he is a business development engineer for Murata Electronics, a global designer, manufacturer, and supplier of advanced electronics materials and components, and multifunctional high-density modules.

Imbued with a heart to serve, M-T’s service work began as a youngster by volunteering with Hosea Feed the Hungry. Through service, he strives to be the “most valuable man in the world.”

“Not through monetary or material gains, but in a way I can positively impact everyone I come in contact with,” said M-T, who feels his desire to help others has led to his success as a corporate and community leader. “Every skill I take to work, every piece of knowledge I have gained, has been forged and hardened through community volunteer work.”

M-T at Missouri University of Science and Technology

Some of his volunteer work includes advising an i21 STEM NSBE Jr. Chapter, a group of aspiring engineers supported by the Atlanta University Center National Society of Black Engineers’ chapter, and being an assistant Scout Master of Boy Scout Troop 100 in Atlanta.

A proud AUCC/DDEP alumnus, M-T credits the program with opening doors that allowed him to take a hold of his future.

“Being a part of the AUCC/Dual Degree Engineering Program allowed me to develop communication and presentation skills that most engineers don’t focus on and enabled me to attend and matriculate to a top-five engineering institution,” said M-T whose name, Marcus, means warrior in ancient Greek, and Tor, means King in old southwest African Swahili.

“That combined with the drive to find mentors, internships and co-ops every summer I was in school, has propelled me into many positions, including my current one with Murata, where I have been an integral part of a multibillion-dollar corporation and in some cases an agent for change and growth.”

On July 29, M-T’s StricklyUNLTD will host #BeUNLTD👑2017, a back-to-school bash to share engineering career opportunities with young minds. He can be reached socially, @Brotha_MT, or email, BrothaMT@StricklyUnlimited.com, or phone, 404-941-4MTS for more information.