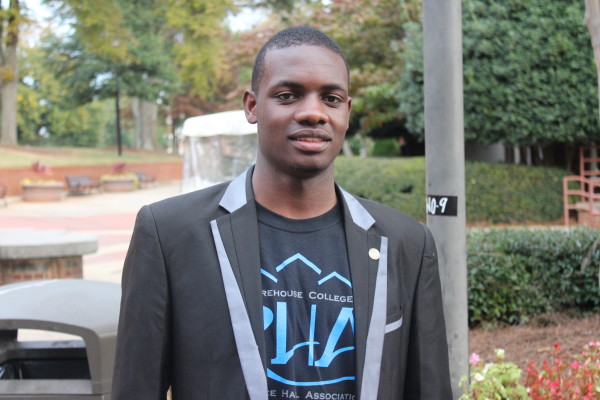 Morehouse College student Prince Abudu has been selected to the 2016 International Rhodes scholar class representing his home country of Zimbabwe. The Rhodes scholarship supports students who demonstrate a strong propensity to emerge as future leaders.

Abudu is the fourth Morehouse student to be selected for the prestigious scholarship to attend the University of Oxford in England. Morehouse is the only historically Black college represented in the 2016 Rhodes scholar class and one of only two Georgia Colleges in this year’s prestigious class. The Rhodes scholarship provides for two or three years of study at Oxford.  Abudu, whose email signature Destinato Alla Gloria, “Destined for Greatness,” best girds his determination to excel.  The Morehouse leader plans to pursue a master’s degree in computer science and an MBA at Oxford.

“I’m blessed and excited. This would not have been possible without the support of my family in Zimbabwe and the new family I have been favored with at Morehouse College. This is an opportunity that I have dreamed of all my life,” said Abudu, who grew up on a rural farm in his homeland.

“My studies at Morehouse prepared me for this next endeavor and I am thrilled to begin this new era of achieving academic excellence. This is the Morehouse culture, and I am extraordinarily proud to represent my college,” he added.

Abudu is a highly motivated student leader and an honor student in the college’s Department of Computer Science. The senior, computer science major serves as the operations leader for Emergination Africa, an intercontinental youth-driven mentorship program he co-founded in 2012 to provide resources and guidance to African students transitioning to college.

His leadership was recognized when he was selected to participate in an Oprah Fellows Program roundtable discussion with former African presidents from Kenya, Namibia, and Mauritius on issues pertaining to democracy and sustainable peace.

In summer of 2014, Abudu interned with Cummins Inc., where he developed a call support tree for technology-related issues for the plant’s IT department and warehouse users.

Abudu is a Resolution Project Fellow and a member of the Morehouse Model United Nations, the National Society of Collegiate Scholars, and the Kutama College Web Design Club. He is also a semifinalist for the Anzisha Prize Opportunity.

“We are so very pleased that Prince Abudu has been named our fourth Rhodes Scholar! It means a great deal to him and to Morehouse College!  Prince’s educational journey has been amazing, as he emerged from a set of exceedingly challenging circumstances in Zimbabwe,”said Morehouse President John Silvanus Wilson ’79.

“He arrived at Morehouse with no small degree of raw intelligence, grit, and a clear and compelling determination to succeed. He has developed into the ‘iconic’ man of Morehouse who is academically, socially, and spiritually equipped to lead and do consequential things in the world.  We are very proud of him, and we are confident that he will thrive at Oxford,” Wilson said.